Clients We Have Worked For

Learn More From Our Blog

Condensation in commercial buildings can prove not only an irritant, it can lead to huge financial implications as well. Where condensation forms on roofs and walls in colder conditions, the drips can lead to damage of internal finishes, machinery or materials and also to Health and Safety dangers within the workplace. Where condensation is forming on ‘single skin’ roofs or walls, or on metal joists, purlins or other supports, Sprayseal can be used to eliminate these problems quickly and easily.

In the winter months, particularly on clear nights, the temperature on the surface of a roof can drop to significantly lower than the ambient temperature. Where roof structures are made up of ‘single skin’ materials, specifically steel, tin, aluminium, asbestos or fibre cement, the temperature on the internal surface of the roof is virtually the same as the temperature on the external surface as there is no thermal resistance between them. Where this happens, any moisture in the internal atmosphere can condense on the colder surface leading to issues of condensation droplets forming. Many building occupants are surprised to find condensation problems occurring within their buildings, especially when the buildings are empty or are only used to store boxes or similar. However, condensation problems such as these can exist in virtually any building with a ‘single skin’ structure, i.e where the roofs or walls consist of only one layer rather than having insulation incorporated within them.

Installing Sprayseal sprayed insulation to the underside of ‘single skin’ roofs and/or walls can eliminate any condensation problems, as well as increasing the level of thermal insulation in the building as a whole. By applying as little as 15 to 20mm depth of Sprayseal — depending on the type of structure, internal conditions, external temperatures and other conditions, even ‘single skin’ structures can be condensation free even in harsh winter frosts. As Sprayseal is spray applied directly to the surface of the roof, as well as to any supporting metalwork which could act as a thermal bridge, the insulation will form a ‘composite’ structure which keeps the internal surface temperature above the ‘dewpoint’ of the internal atmosphere. 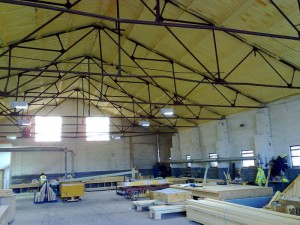 As Sprayseal is spray applied, even complex shapes and corrugated sheets can be insulated quickly and easily with the minimum of disruption to the building. Also, unlike some other forms of insulation, being spray applied means that Sprayseal provides a monolithic layer of insulation with no joints or gaps which can give rise to ‘cold spots’ and potential problems with condensation in years to come. When considering how to prevent or eliminate condensation on roofs and walls in agricultural buildings, Sprayseal can seem initially more expensive than some other forms of insulation. However, as a long-lasting and guaranteed solution to the problem, Sprayseal sprayed insulation can prove to be far more cost-effective than other solutions such as replacing the roof or over-cladding.

When applied to eliminate condensation, many of our recommended contractors will provide guarantees on completion of their work to provide building owners with peace of mind for years to come.

Rick Northover is one of the founders of Sprayseal Roof Insulation, which was founded in 1988. When he is not helping domestic and commercial companies in reducing their heating costs, he can be found either watching football or playing golf.

See all posts by Rick Northover